Achieving internal buy-in, leveraging your existing assets, and understanding the unique challenges of outsourcing to a search engine optimization company

The powerful capabilities of organic search engine optimization (SEO) are now a highly sought after marketing tool by many companies that want to alert customers to their products or services by focusing on certain keyphrases that highlight these offerings. And though SEO has embarked on a meteoric rise in the past few years, other non-traditional forms of marketing are now gaining a great deal of well-deserved credibility as well. More and more marketers are using paid ads to hone in on a potentially profitable client base, while other more traditional channels, such as PR and print ads, appear to be becoming somewhat less effective.

In a recent study,1 Forrester Research found that interactive marketing spending will reach nearly $55 billion by 2014, representing 21% of all marketing spend. And the fact of the matter is that marketers are continuing to place more stock in newer forms of marketing and social media, leaving many higher-ups to wonder if it is time for them to include these channels in their own marketing mixes. And with the help of your search engine optimization company, it’s possible to achieve outstanding rankings and results!

What follows are some common considerations that should be analyzed prior to the launch of an SEO campaign so that you will know what you are getting into, what you will need from your own team and your prospective search engine optimization company, and how to most effectively pursue this particular form of marketing.

Search engine optimization is unlike many traditional forms of marketing in that several departments must be involved in order for the SEO campaign to be successful. Apart from the obvious need to get buy-in from upper management (unless, of course, you are upper management), you will also need to get buy-in from your sales department and, very importantly, your IT department before pursuing the powerful capabilities your search engine optimization company can bring to the table.

While a well thought out, highly targeted SEO campaign is becoming an increasingly popular marketing tool, many “old school” bigwigs are uncomfortable pursuing something that is completely foreign to them. This is not an indictment of the individual – keep in mind that the traditional marketing methods that the company has likely relied upon (trade shows, direct mail, print advertising, etc.) have been relatively unchanged for decades.

While these traditional marketing channels may have remained relatively stagnant, the allocation of spend for them has not. As a recent study by SEMPO indicates, marketing dollars are increasingly flowing away from these channels and into the online arena (see chart #1). One of the reasons for this is obviously the effectiveness of the channel (see chart #2), but another, which can be used as ammunition when you are trying to convince your higher-ups to go with a search engine optimization company, is the ultimate accountability that goes along with online marketing: the data that indicates success or failure of your SEO campaign is of the black-or-white variety. 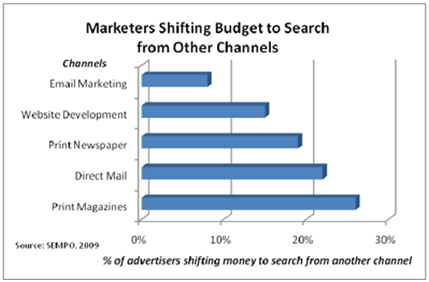 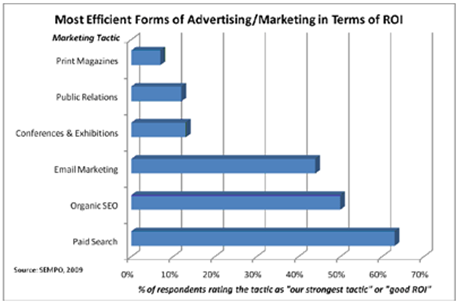 When describing the effectiveness of a company’s marketing strategy, there is often an old sentiment tossed around – “I know that half of my marketing is not working, just not which half.” Because of the analytics involved in search engine optimization, your company higher-ups can take comfort in the fact that this is not another marketing initiative that will self-perpetuate indefinitely – the metrics involved in your SEO campaign will demonstrate that it is working, justifying the continued expenditure.

When trying to get buy-in from upper management, you also have a formidable weapon in the actions, or inaction, of your competitors. If your hated rivals are actively embracing the tools offered by a search engine optimization company, there will be a tendency among upper management not to want to let them get too far ahead. If none of your top competitors appear to be actively pursuing this channel, your company can gain traction before your rivals do and thus gain the competitive edge. Whichever the case, it is now much easier to present a compelling argument to pursue an SEO campaign.

There is often a mutual suspicion and distrust between sales and marketing, but in order for your SEO campaign initiative to be as successful as possible, you should involve sales in the process of selecting a search engine optimization company as early as possible. Achieving buy-in from the salespeople is critical in making certain that the leads that are generated from the website are followed up on as diligently as they should be. By asking sales to assist in important areas of the SEO campaign, like creating an ideal prospect profile and helping to identify targeted keyphrases (after all, they talk to your prospects more often than anyone), you should be able to ensure that when the leads start coming in, your sales team will believe that leads from the website are high-quality and worthy of their immediate attention. After all, without increased revenues, the SEO campaign is not a success – and your salespeople will play a crucial role in determining this.

This can be your most difficult challenge. Unlike most other forms of marketing, search engine optimization is a mixture of marketing and technology. Without achieving buy-in, or at least acceptance, from the IT team prior to the launch of an SEO campaign, you are likely to run into problems. IT teams can be particularly protective of their “turf” and may be reluctant to hand over information to your prospective search engine optimization company. This is not inherently bad (it obviously shows dedication to the job), but it can make things difficult when your search engine optimization company is requesting that changes be made to the company website or that analytics platforms be introduced (to name only two likely scenarios).

If you are not used to dealing with your IT department, it would probably serve you well to involve your prospective search engine optimization company in the process of achieving buy-in with them. After all, the vendor should have years of experience in approaching these situations without ruffling feathers. If you choose to approach IT yourself, make it a point to let them know that they will receive a fair share of credit for the success of the initiative and involve them in how you are defining success. This may be enough to win them over to your side.

<< Back to Archive Blog